“Stop, I Want to Listen!” Reaching the Blind and Visually Impaired with Torch Trust

WATCH ‘“STOP, I WANT TO LISTEN!” REACHING THE BLIND AND VISUALLY IMPAIRED WITH TORCH TRUST’

LISTEN TO ‘“STOP, I WANT TO LISTEN!” REACHING THE BLIND AND VISUALLY IMPAIRED WITH TORCH TRUST’

October is Global Blindness Awareness Month. According to the World Health Organization, “Everyone, if they live long enough, will experience at least one eye condition in their lifetime.” This means an estimated 2.2 billion people around the world suffer from some form of visual impairment or blindness.

With your help, MegaVoice prioritizes the spiritual needs of this precious population. Read more to learn about how one of our Partners, Torch Trust, is helping blind and visually impaired people in the UK connect with God’s Word and gospel community.

What Does It Mean for the Blind and Visually Impaired to Enjoy a Fulfilling Spiritual Life? 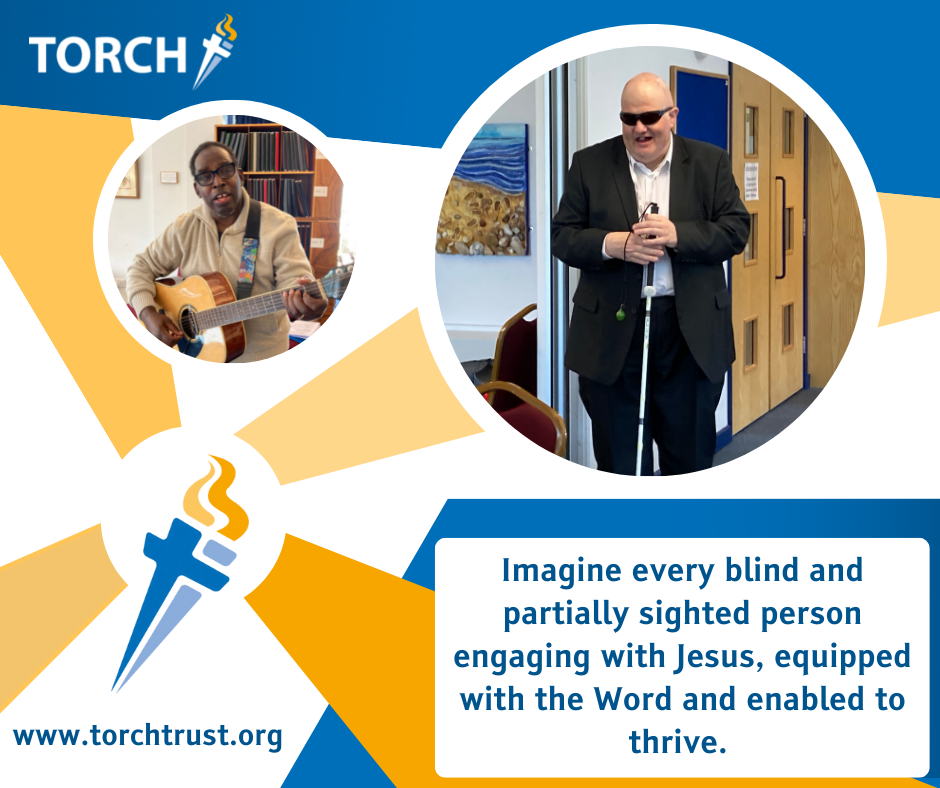 Torch Trust is a UK-based ministry that seeks to answer this question. The ministry began in 1958 as a humble home-based outreach. Ron and Stella Heath worked to provide resources to visually impaired students in their community who were keen to explore the Christian faith. From there, Torch Trust grew into a multifaceted discipleship and training program.

A big part of Tim’s role is helping Torch evolve and grow. While the ministry has a rich history and a powerful legacy, there was more to do. Tim wasn’t satisfied with simply serving the needs of blind and partially sighted people who were already Christians. He found himself wondering: What new things does Torch need to step into?

“Anyone who’s blind or visually impaired can have an audio Bible player for free. A complete gift.” 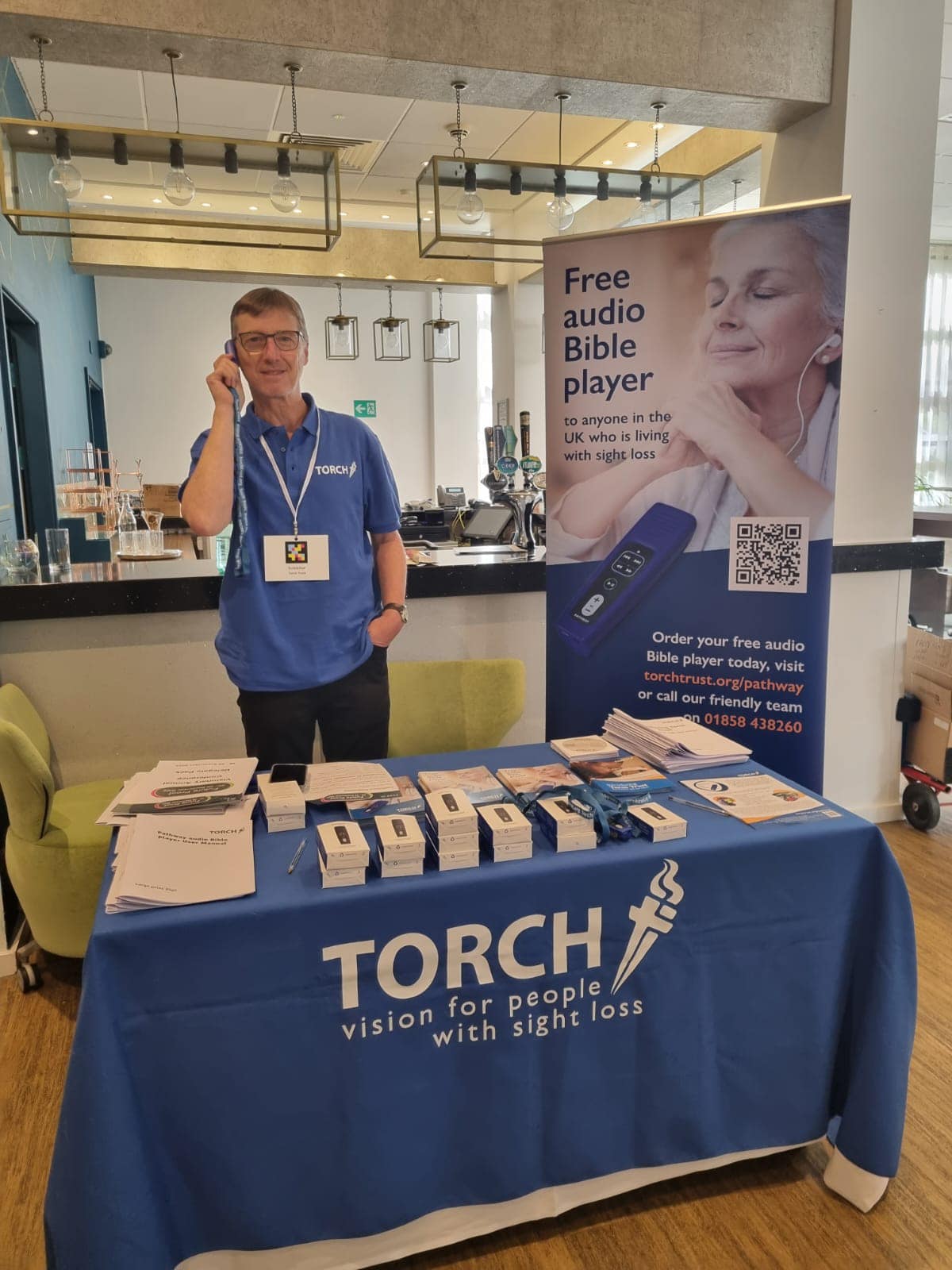 Tim realized that Torch needed to do more outreach. But how could they reach people who were not yet Christians? As he reviewed different ministries Torch had partnered with in the past, he came across MegaVoice. He got back in touch with MegaVoice and was introduced to the Pathway Player. It was smaller, simpler, and cheaper than the audio Bible players Tim was familiar with. Most importantly, it was perfect for the initiative Tim had in mind.

“How about we say across the UK, anyone who’s blind or visually impaired can have an audio Bible player for free – a complete gift?”

It was a bold idea, but that’s what the ministry needed.

Tim knew in order to appeal to people who were unfamiliar with the Bible, he needed a narrator who was well-known. David Suchet is a beloved English actor who played Hercule Poirot in Agatha Christie’s Poirot, a popular British television show. Some years ago he had recorded the NIV Bible. His voice is recognizable and soothing to British listeners.

The Power of Partnership

Working closely with MegaVoice, Torch developed a version of the Pathway with David Suchet reading the New Testament and Book of Psalms. One of Torch’s trustees is Marilyn Baker, a blind singer and songwriter who’s well-known in the UK Christian community. Marilyn recorded an introduction and Lord’s Prayer for the player. The player also includes three of her songs.

Ultimately, MegaVoice helped Torch develop a specific solution for their unique project. Tim asked, “How can we reach unsaved blind and visually impaired people in the UK with God’s love?” Torch’s customized Pathway player is the result.

“It’s so fantastic to be able to engage with the Bible again.” 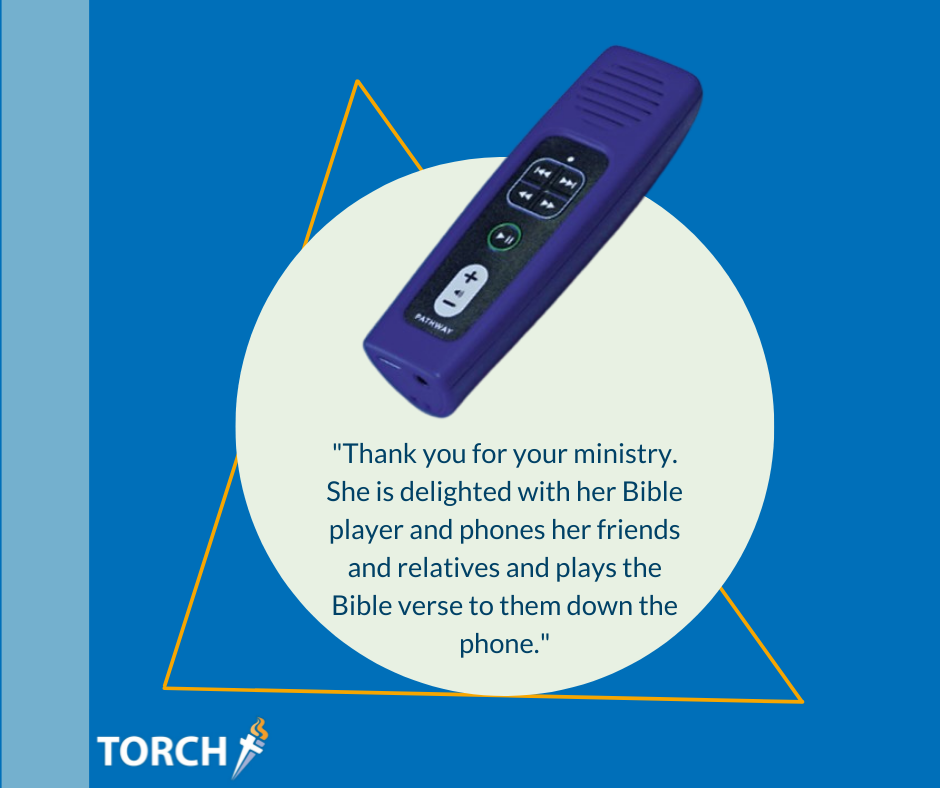 Torch launched their initiative with 1,000 Pathway players. In the first six months, they gave away more than half of them. At the same time, Torch reached out to donors to help support this work. Consequently, Torch started a separate program on social media asking people to donate 20 pounds (about $22) to sponsor an individual audio Bible. With this option, Torch gave Christians in the UK and around the world a chance to serve the blind and visually impaired in a personal way by giving the gift of scripture to someone with sight loss.

“Many of the Pathway players are going to people who would either not consider themselves Christians at the moment or people who’ve had a background in Christianity and are reconnecting with their faith,” said Tim. “The thing we’re hearing often is, ‘It’s so fantastic to be able to engage with the Bible again!’”

Many players go to older people who don’t have easy access to smartphones or the Internet. Sadly, they’re losing their sight in their 80s or 90s and need a new way to study God’s Word. But Torch has also found that younger populations are delighted to listen as well.

“We did testing at our office and asked our local sight loss agency to recommend some non-Christians we could talk to and trial this with,” said Tim. “One guy came into the office and immediately told us straight away, ‘I’m not religious. I don’t do church.’ However, he became engrossed in listening to the Bible player and the Book of Philemon really touched him. Whenever we tried to ask him questions, he would say, ‘Stop, I want to listen!’ or ‘Don’t interrupt!’ David Suchet’s voice is familiar to people, which really helps.”

Torch has also received very positive feedback in terms of player usability. “We had one woman tell us that she’s delighted with the MegaVoice and she phones her friends and relatives and plays the Bible through the phone to them,” said Tim. “She told us ‘I could listen to this all day.’” 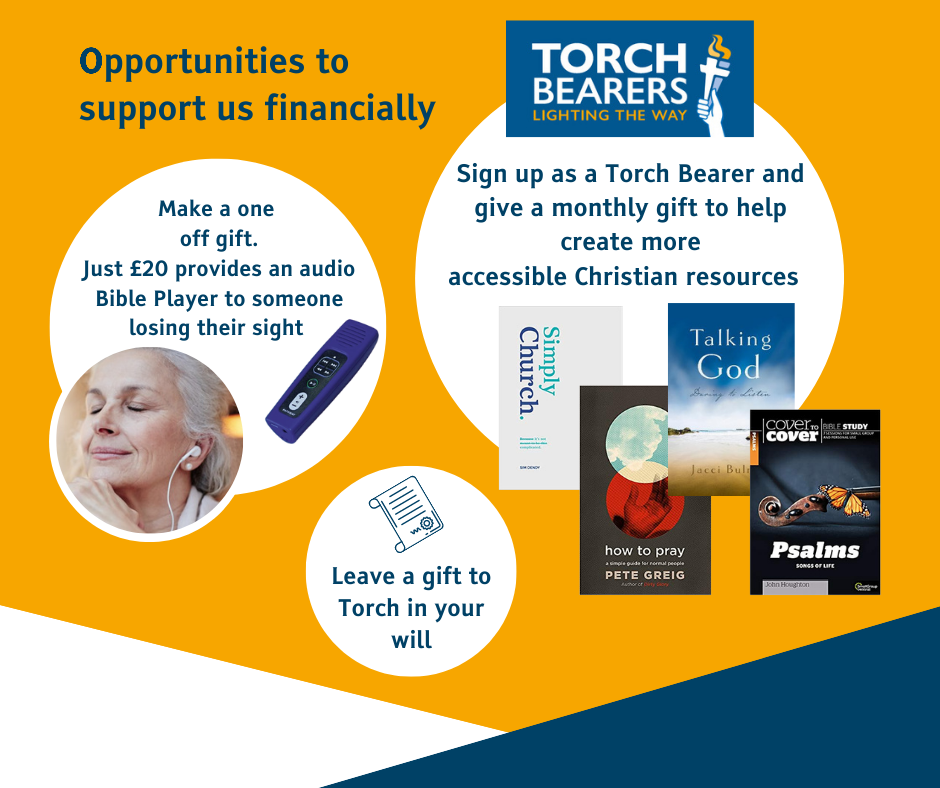 Regardless of whether you live in the UK or not, you can help Torch Trust fulfill its mission! Here are three ways anyone can get involved and make a difference for blind and visually impaired people:

Torch also offers many resources for churches that want to be sight loss friendly! If you suspect that your church might not be equipped to serve the needs of blind and visually impaired people, find out how to grow here.

“Everyone has the right to a fulfilling spiritual life, but feeling left out or unable to join in at church often means that people stop attending altogether. They then miss out not just on regular services, but social activities, a sense of community and a feeling of human connection. Churches may not realize that anyone in their congregation or local community has sight loss, and if they do they may not know how to provide support. Sight Loss Friendly Church is here to help.”