Audio Bibles in the Andes Mountains

LISTEN TO ‘AUDIO BIBLES IN THE ANDES MOUNTAINS’

The Power of a ‘One Woman Purveyor’ 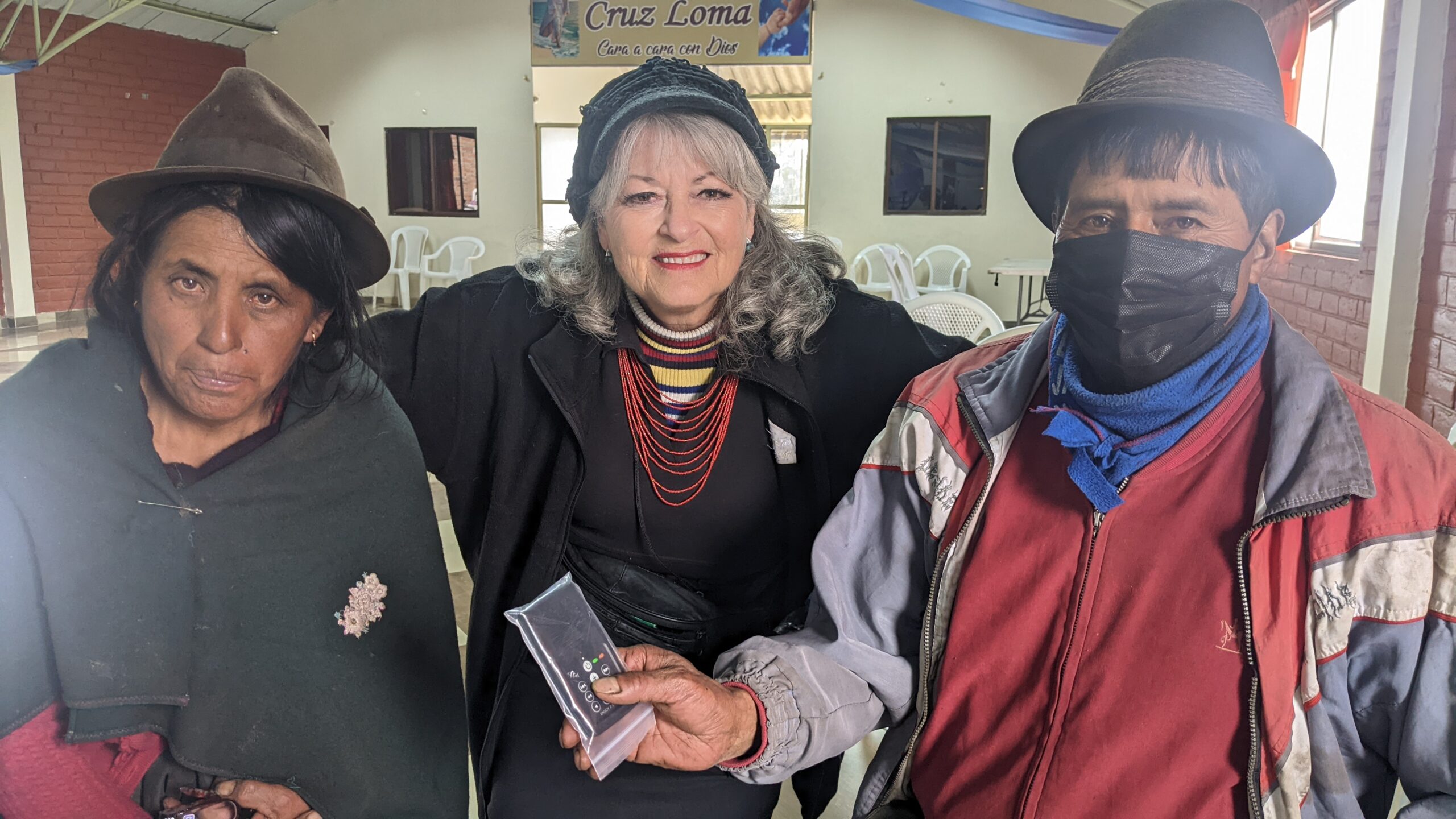 MegaVoice partners with some of the largest outreach organizations in the world, including Samaritan’s Purse and InTouch Ministries. But we know that all it takes to make a difference is one person answering God’s call.

Bonnie Kee describes herself as a ‘one-woman purveyor’ of MegaVoice audio Bibles. She’s on a mission to use her skills and resources to share God’s Word around the world. We’re encouraged by her enthusiasm and we think you will be too!

Over a decade ago, Bonnie found herself at the end of a 39-year marriage, with no kids or grandkids. She lifted up a heartfelt prayer: “Oh Lord, it’s just You and me!” He has been enough. With the Holy Spirit’s leading, she began investing her time and energy in short term mission trips, taking one or two trips each year as opportunities arose. When not traveling, she volunteers with local organizations near her California home.

Now, at the age of 72, she shows no signs of slowing down. Despite two knee replacements, two hip replacements, and pins in one of her shoulders, she says, “As long as the Lord keeps me upright and mobile, I will follow wherever He leads!”

She’s been blessed with a large group of similarly single female friends who pray for and support her during her travels to Africa, the Andes Mountains, and beyond. “I have twenty ladies cheering me on,” says Bonnie. “These trips are not super safe and a lot of people can’t do what I do because they have sensitive stomachs or trouble getting around. I figure if God’s blessed me with artificial parts that work, and a strong stomach, then I can bless others with what I do.”

If Your God is So Smart, Why Doesn’t He Speak Our Language? 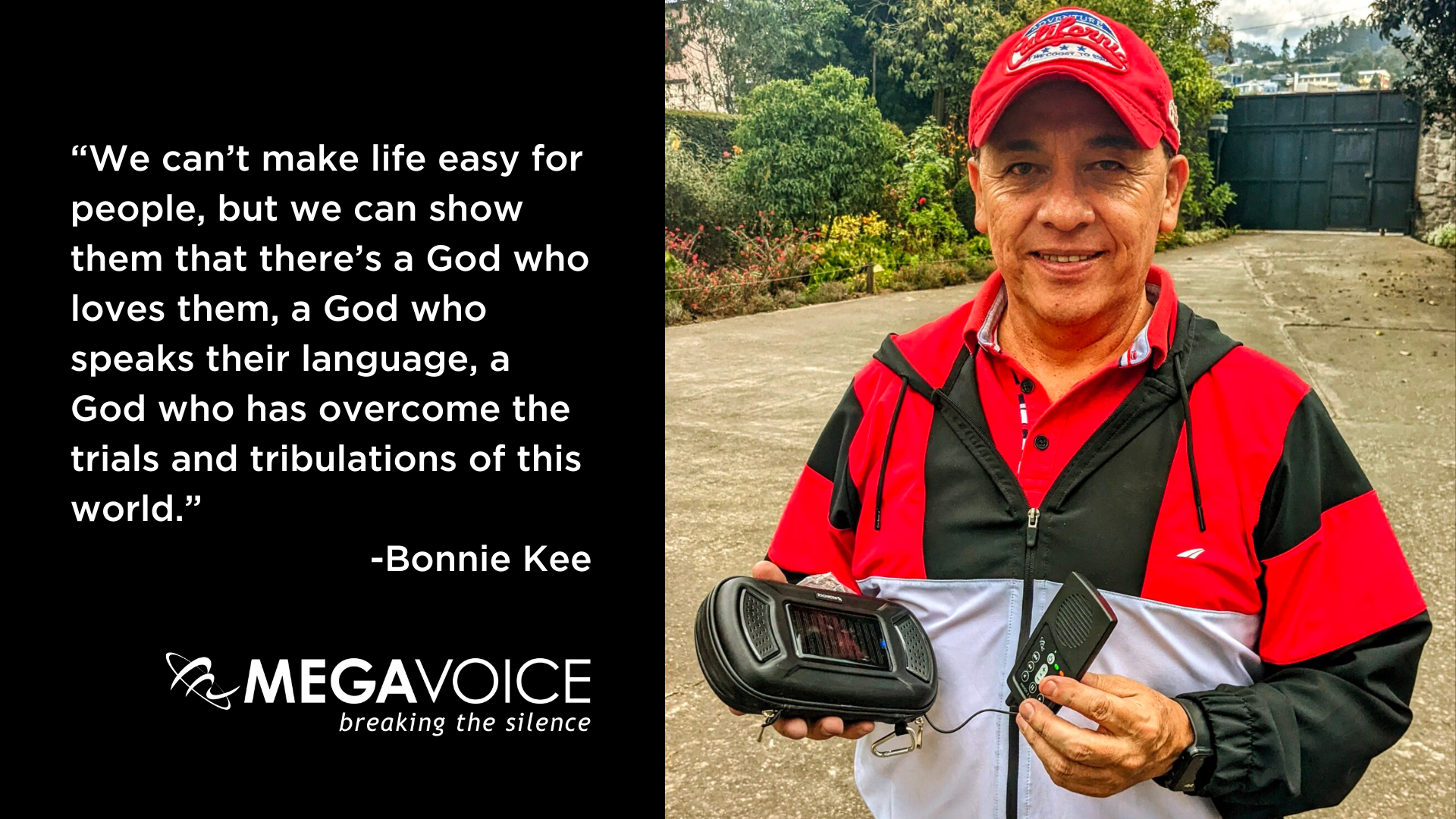 In her travels, Bonnie was surprised to learn that many people in third-world countries can’t read in their native languages. These people may have learned to read a national language at school, but it’s not the language they understand in their hearts.

She remembered a story she’d heard about Cameron Townsend, the founder of Wycliffe Bible Translators. While working in Mexico, he was exposed to the many native dialects spoken in the region. An indigenous man who spoke both Spanish and one of these dialects asked Townsend, “If your God is so smart, why doesn’t he speak our language?”

“I could see the reality of this question on people’s faces,” said Bonnie. “I began to see that people need audio Bibles in their heart languages.”

Thankfully, Bonnie was introduced to MegaVoice audio Bibles through a missionary organization. She said she was impressed with how dependable the players are and how many languages are available. She began taking the initiative to bring audio Bibles in the appropriate languages with her on every trip she takes.

“Seeing the look on people’s faces when they realize the Bible is in their native language is priceless,” says Bonnie. “At first they’re usually just disinterested and polite, but then their whole face lights up. I’m amazed at how many people have never even seen an audio Bible.”

Bonnie has taken MegaVoice players all over the world. She travels with them in her personal backpack, praying that God will show her who to share them with.

“We can’t make life easy for people, but we can show them that there’s a God who loves them, a God who speaks their language, a God who has overcome the trials and tribulations of this world.” 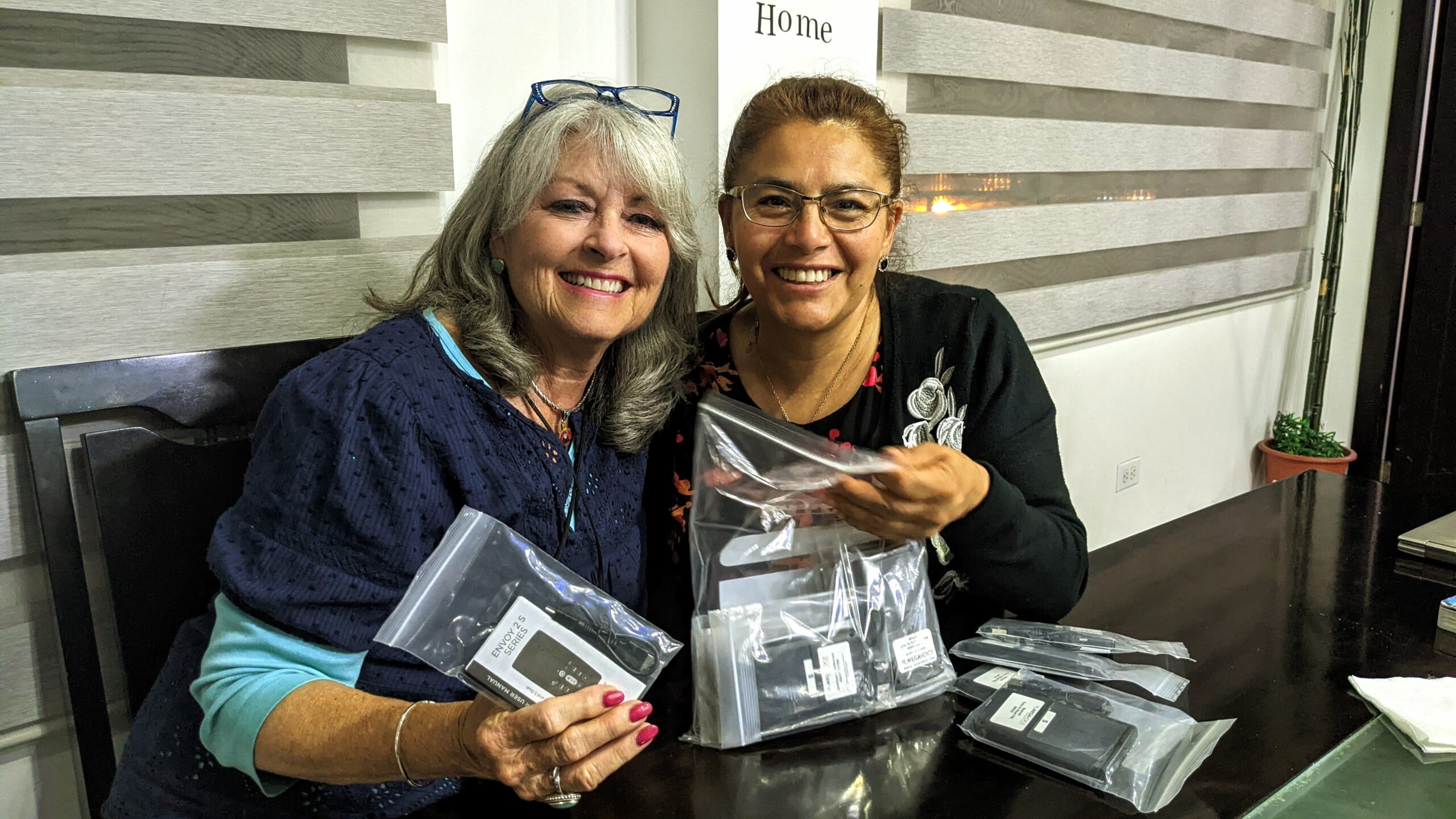 One of Bonnie’s favorite places is the Andes Mountains in Ecuador. In our Zoom interview she wore traditional garb from Ecuador, including a bright pink alpaca shawl closed with a large safety pin, matching crystal earrings, and a black hat. “Precious, precious folks,” said Bonnie, speaking of the women who inspired her outfit. “Very giving, very sharing, very sweet.”

On a recent trip, Bonnie was able to bring audio Bibles to pastors and church leaders near Quito, the capital of Ecuador in the Andean foothills.

She met Pastor Hernan, the district superintendent over 67 Nazarene churches in the Andes Mountains. At ten of these churches, congregants only speak native dialects. Pastor Hernan had never been exposed to audio Bibles and was thrilled to receive an Envoy audio Bible for each of these ten churches. Bonnie was shocked that this man who had been in ministry for over thirty years with people who speak native dialects had never been given the opportunity to use audio Bibles. She gave him a MegaVoice speaker too.

“You could just see the wheels turning,” said Bonnie. “He was holding the Bible to his heart and the speaker in his hand and he said, ‘You must come back and speak at my churches!’ I gestured to the audio Bible and said, ‘This is the most important thing that’s going to be speaking at your churches.’”

An Audio Bible Lending Library in the Andes Mountains 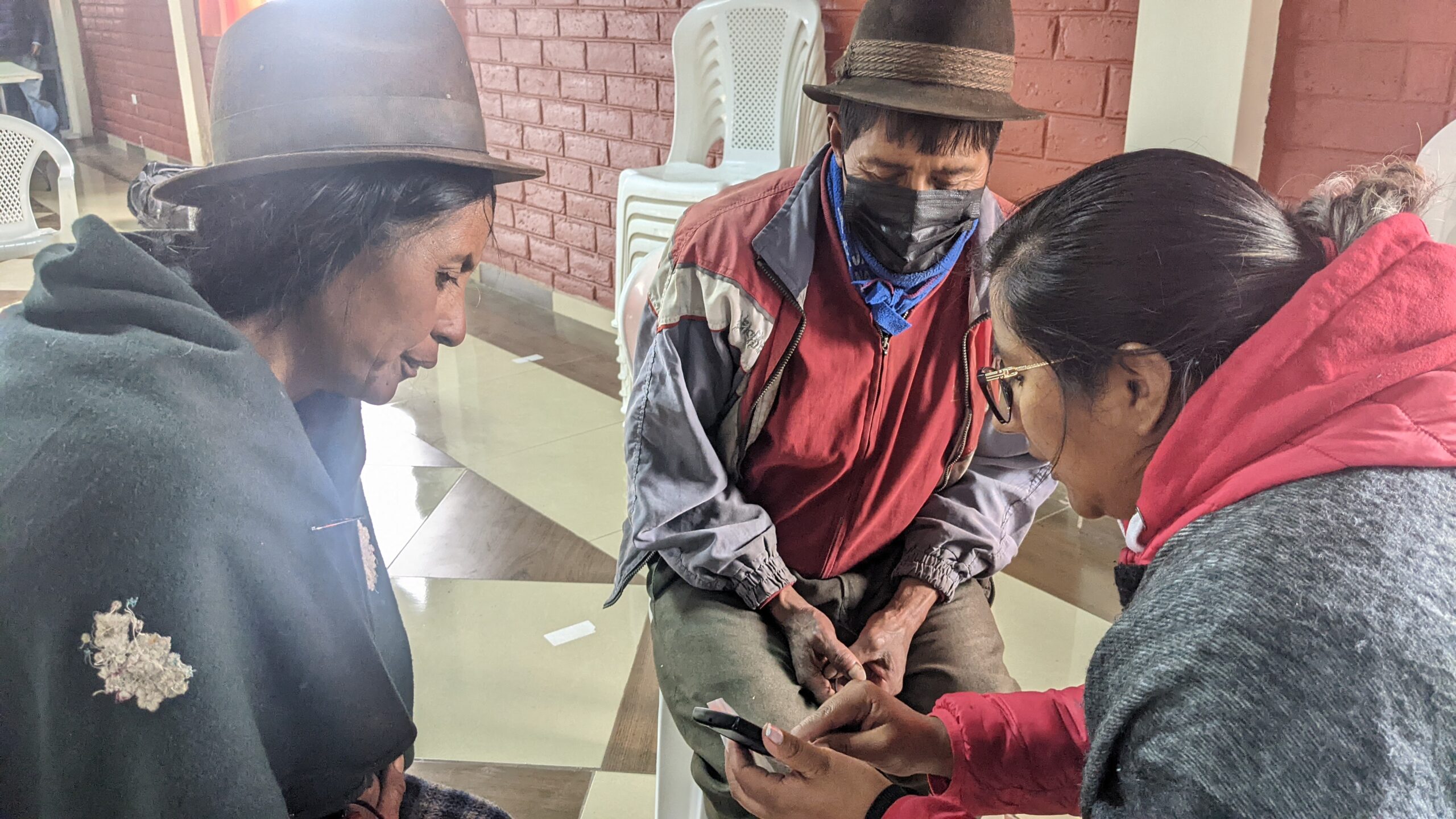 Bonnie was able to send another 25 new audio Bibles with Cristy and Cristian Ortega, pastors to independent churches high in the Andes at 10,000- 12,500 feet altitude. Cristy had audio Bibles from a trip Bonnie had made there three years ago. Bonnie was delighted to learn that Cristy has been checking the players out to parishioners like a lending library. The new players equipped her to minister to more of the villages of the Andes.

“Cristy and Cristian have such a passion for these communities,” said Bonnie. “Especially the children who learn Spanish in school but so often speak the Chimborazo dialect at home.”

Now When They Hear the Bible, They’re Going to Be Able to Say ‘It’s My Bible.’ 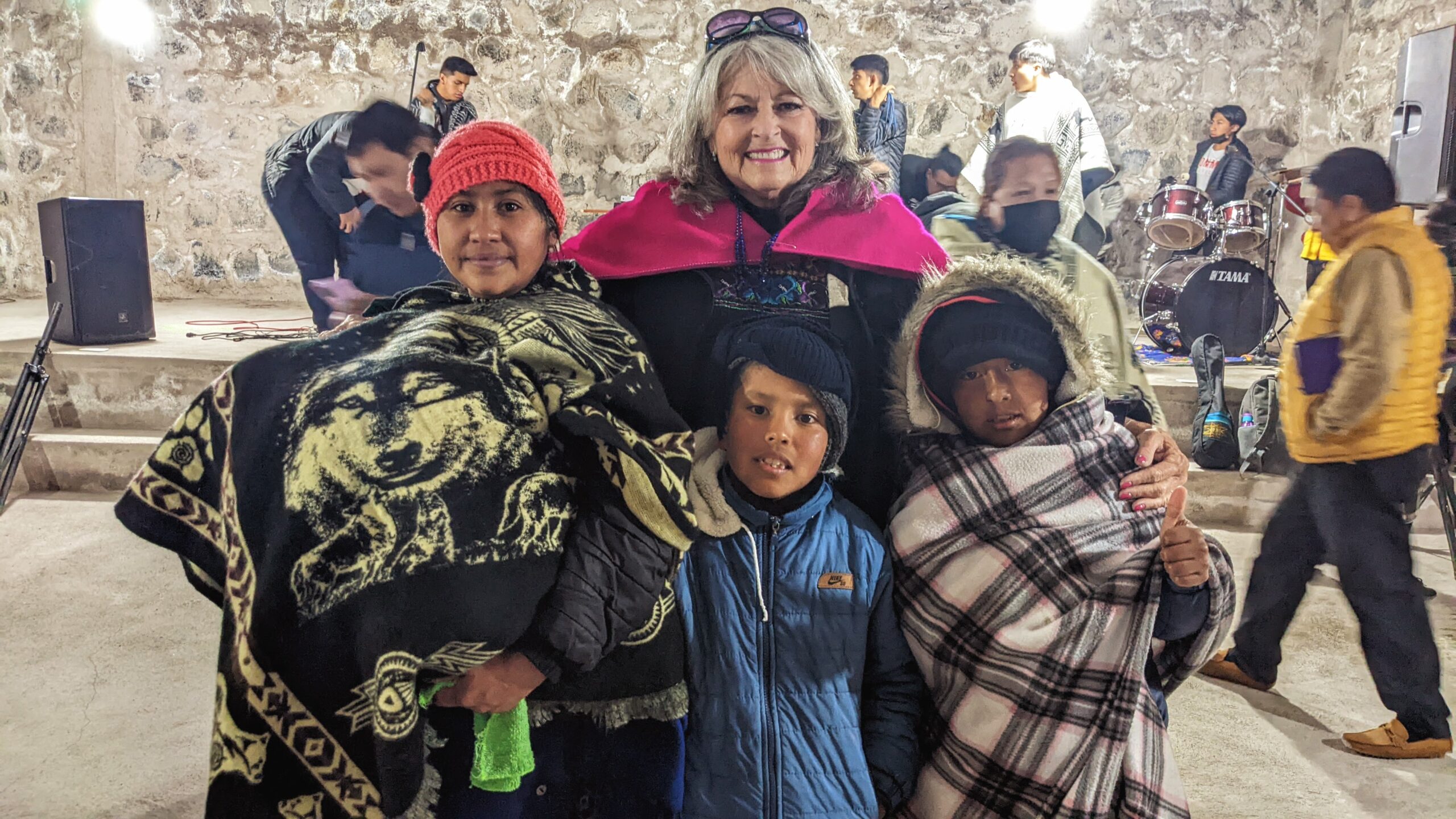 One of the Ecuadorian superintendents told Bonnie:

“Now, when they [the church congregants who speak native dialects] hear the Bible, they’re going to be able to say ‘It’s my Bible.’ It’s not the Bible of the conquistadors who invaded from other nations and taught us Spanish and made us speak their language. It’s the language we understand with our hearts.”

Bonnie doesn’t call herself a missionary, but she believes that we are each called to be missionaries in our everyday lives. She told me, “One person can’t change the world, but we can make a difference in the world for one person at a time.”

Bonnie describes herself as ‘a pack mule for Jesus’. “I’m not one to go to different countries just to show up and say I’ve been there. I really want bring things that are worthwhile. I’ve brought chocolate, peanut butter, extra strength Excedrin, reading glasses, solar powered lights, fabric feminine hygiene kits – but I always leave room for audio Bibles. It’s the Word of God that changes people’s lives, not missionaries’ good intentions.”

“I Will Follow Wherever He Leads – And You Can Be Sure That I Will Be Taking Audio Bibles With Me!” 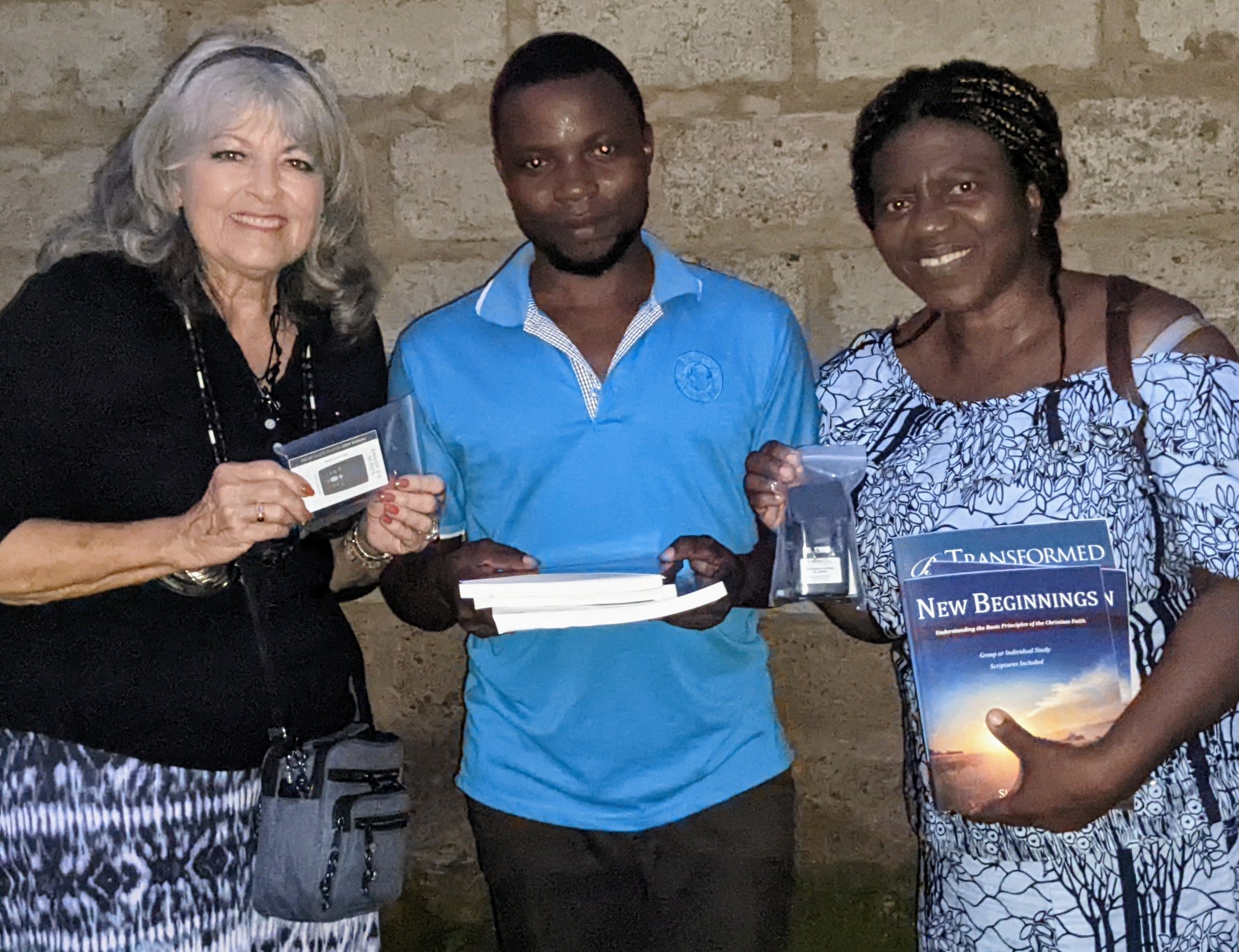 Over the last thirteen years, Bonnie has given away more than 100 audio Bibles. She funds her own trips without formal fundraising. Currently, she is serving in Ghana (pictured above with Pastor David from the village of Boujiose).

“If I spend my last pennies buying audio Bibles, it’s okay with me,” said Bonnie. “What a wonderful way to spend my money: Sending the Word of God overseas to someone who wouldn’t ever hear it in their own language otherwise! These audio Bibles are such a key part of what I do. I can’t wait to meet people in heaven who came to the Lord through these audio Bibles.” 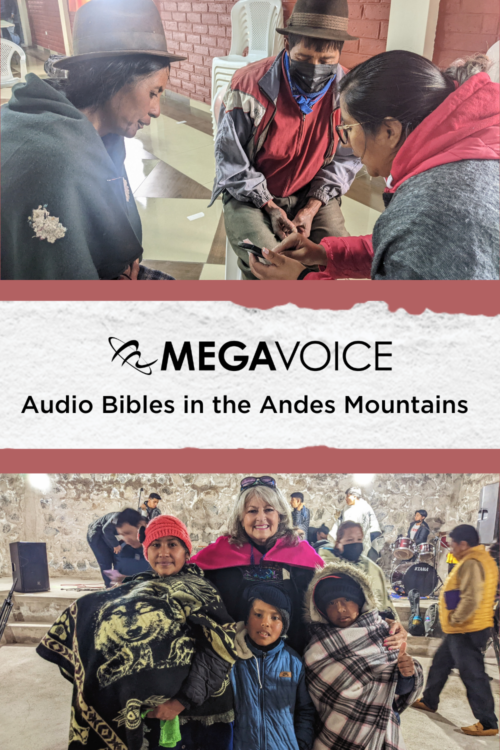