A light shines in the darkness

They thought they were bringing spiritual aid to missionaries in Nepal.
God had even bigger plans.

John Pudaite tugs at the straps on his backpack and picks up his pace. It would be tight but they just might have enough time. He winds around travel-weary people leisurely making their way through the Calcutta airport. Pudaite is exhausted too, but he doesn’t have time to walk. Outside the airport, a group of people in a van whiz through the dust, cows, and chaos towards the arrivals gate. Pudaite will meet the van at the curb where he will quickly pick up the deliverables before rushing back into the airport, through security, and on to Kathmandu. They would have to time it just right.

Pudaite is president of Bibles For The World, an organization committed to making God’s Word available everywhere, especially to the most unreached, remote people groups. Of the 274 people groups in Nepal, 266 are considered unreached. Performing mission work there presents some unique challenges; the infrastructure of the country is still trying to recover from the severe earthquakes that occurred in 2015. Amenities common in western countries, like electricity, are still not available in portions of the country.

Despite the challenges, there is a group of approximately 80 ‘engagers’ – missionaries on the ground called to bring the gospel to 39 of these unengaged people groups. “We had provided printed scriptures to these engagers earlier,” remembers Pudaite. They were thankful, but they also expressed the challenges associated with ministering to these predominately oral people groups. So Bibles For The World decided to find a solution. They partnered with MegaVoice to deliver 100 solar-powered audio Bibles that might better integrate into the oral Nepali culture.

On the curb of the Calcutta airport, the MegaVoice India team quickly delivers the Envoy 2 Ember players to Pudaite who rushes back into the airport to the rest of his team. They distribute the players between their carry on luggage, packing no more than ten players together in any one spot in the anticipation that some will be confiscated.

They board the plane just in time. 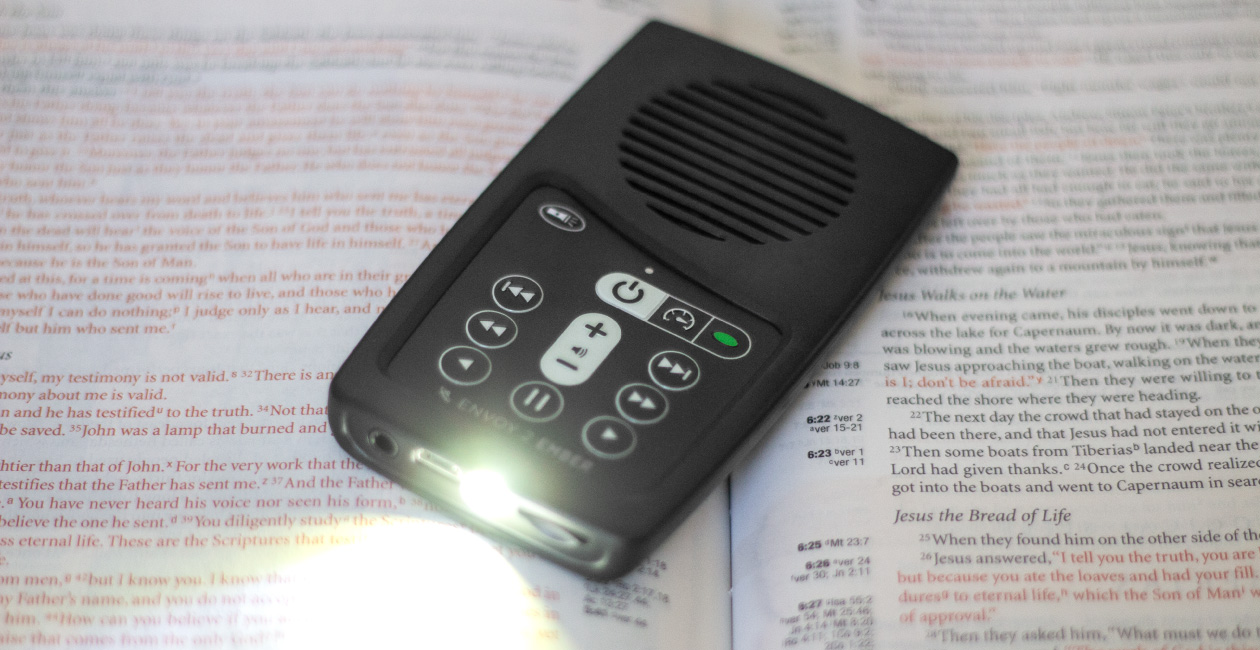 After they land in Kathmandu, the Bibles For The World team winds through the tight city alleyways strewn with colorful Buddhist prayer flags towards the prearranged meeting place, “It was on the top floor of a four-story building,” recalls Pudaite. “There was a large, open hall there where about 100 believers could assemble. The group had been brought in from all over the country for a time to compare notes, share praises and prayer requests, and encourage each other.”

Pudaite walks to the front of the room to present the MegaVoice player, unaware that God had been planning something more for these engagers from the beginning. And it was about to come to fruition.

As he begins to take out the unit and explain how to use it, he accidentally turns on the built-in flashlight. A wave of ‘hallelujahs’ and applause sweep through the group. Confused by the excited reaction, Pudaite looks to the group’s leader, who smiles wide and says,

“John, you didn’t know this but last night, the group was discussing all the obstacles we’re facing and what we need to help us as we do this important work. One of the most critical things that we all brought up,” he says, “was the need for flashlights.”

Here was Pudaite, the very next day, holding their answered prayers in his hand.

Pudaite laughs as he remembers, “When I realized what was going on, I said, ‘Hang on, you haven’t seen anything yet.’” He played the group the pre-loaded Nepalese scriptures and lessons, “They were just amazed,” he says. “The looks on their faces were just wonderful and with each different thing I played you could see their eyes light up.”

On August 15, 2018, Nepal’s new anti-conversion laws went into effect. If found guilty of converting or encouraging someone else to convert, you face five years of imprisonment and a fine of fifty thousand rupees. Foreigners are not exempt.

“The government is noticing that Christianity is growing and churches are popping up all over the country. That’s why this law was put into place,” says Pudaite. Bibles For The World communicates with the engagers and ministry partners in Nepal regularly, sending them encouragement and prayers, and they respond, “We will not be deterred. We are not going to stop. The laws will not discourage our enthusiasm for getting the gospel to these unreached people.”